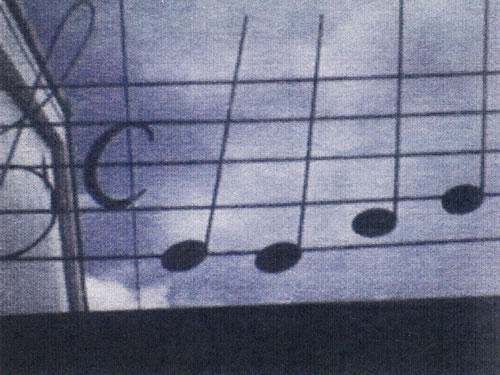 The film This World (Winter) is a form of video correspondence between Hirokazu Koreeda and Naomi Kawase, a remarkable joining of two sensibilities of one film.

Blow-up taken from another film: a reified memory - in the fiction film by Hirokazu Koreeda After Life (Wandafuru raifu, 1998) some dead people find themselves in a house hidden somewhere in nature, which is some sort of transit point, where employees help the deceased to choose one memory from their lives.

The staff attempt to film and thus objectify these memories, and with this single memory the dead go off into non-existence. It is the same as viewing the film as a point of initiation, which is used by man in his longing for immortality, even though it remains for him an obstacle of sorts, separating the aspirant from salvation.

The magic and illusion of film, its fictitious authenticity that breaks free of time to feign eternalness, continues to fascinate the memory of man, which flows with the process of forgetting. This correspondence, which is, among other things, an exchange of memories that we want told, is a distribution of halted memory, which then continues in others and is developed by their imaginations.

This mutual initiation into the world is an aesthetic and sensory joy, a proposition and permeation, a choice and understanding, tenderness at a distance, thanks to which the external space acquires the contours of significance.